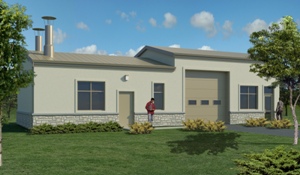 Our crematorium has had a much needed facelift. This building was originally built in 1987 and has been well used. The board of directors decided it was time to refurbish this building and to add an office and witnessing room. The building is now completed.

The Belleville Cemetery Company has recently received a $300,000 grant from the John M. Parrott Foundation to revitalize and repair the deteriorating mausoleum. Mark Hopper, the cemetery’s general manager said the grant couldn’t have come at a better time. “This year marks the 135th anniversary of our cemetery and what better way to celebrate the anniversary than with a gift from the foundation for a project that is long overdue”. 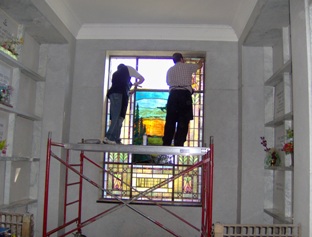 The single-storey mausoleum with full basement was erected in 1927 and sits prominently in the middle of the sixty acre cemetery. The main floor contains 200 full-sized casket crypts that were purchased in the early 1920s. The last remaining crypts were sold last year. 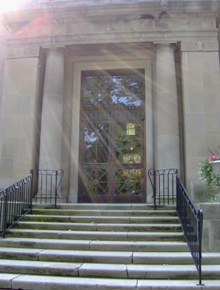 “The money generated from the sale of all crypts was not enough to cover the long-term maintenance of the building” Hopper said. “So the cemetery had applied for funding to help with the project to revitalize the mausoleum”. Even though the $300,000 grant was given earlier this year, Hopper said the cemetery board couldn’t announce the mausoleum project until it was ready to proceed. 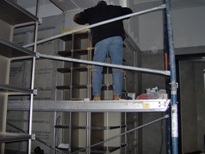 “The majority of the contractors are in place to carry out the work”, Hopper noted. “The work will begin as early as this month, and should be completed by next February”. Three large stained glass windows will be some of the first items to be repaired. They will be removed and then refurbished and repaired to their natural state before being re-installed with protective glass. The beautiful stained glass windows are in desperate need of repair because of years of weathering. “The history of these windows is uncertain but the company that will be repairing them has indicated that they were made of Tiffany glass from New York” Hopper said.

Furthermore, there will be a new concrete entrance to the mausoleum and a wheelchair ramp will be added at the same time for increased accessibility. Inside, contractors will plaster and paint the entire interior. A heating system and carpeting will also be added. Hopper said the cemetery board has also agreed to add about 200 crematorium niches in the mausoleum’s chapel to accommodate further burials. “Revenue from the sale of the niches will go towards offsetting long-term maintenance issues with the building so that we’re not left in this situation again”.

The $300,000 project will also involve extensive landscaping, road improvements and exterior stonework to the mausoleum. “Managing the project ourselves reduces the overall costs and allows us to carry out more work with the grant”, said Hopper. John Trafford, cemetery board chairman, said the foundation grant is making the mausoleum revitalization project a reality. It is also the first grant ever received by the nine-member volunteer cemetery board. “Without the grant, the mausoleum would have to wait until we have money to put into it” said Trafford, adding the cemetery company is a non-profit charitable organization that receives no government funding.

Over the past few years, the cemetery board has spent capital funding to erect a new service building, add to the waterfront crematorium garden and improve roads. “Now we have the money to proceed with these long overdue renovations to the mausoleum”.

Trafford said Bernice Parrott and her late husband, Jack, have been extremely supportive of the cemetery. Jack Parrott is buried in the cemetery. “The Parrotts have been very generous to the community and, as a very vital part of the community, we appreciate the grant to enable us to proceed with the renovations which will benefit the entire community” Trafford said.
There are approximately 300 interments every year at Belleville Cemetery and more than 30,000 burials since the cemetery opened in 1872. It is the resting place of Canada’s fifth Prime Minister, Sir Mackenzie Bowell, as well as author Susanna Moodie and her husband Dunbar Moodie, the first sheriff of Hastings County, as well as Samuel Greene, an early pioneer in deaf Education in Canada.

Article as it appeared in The Belleville Intelligencer. Provided by Mark Hopper. One of the first mausoleums in Ontario is getting a much needed breath of new life.